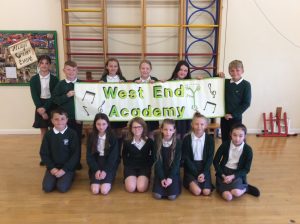 Last week, the school choir joined 4,500 other children from our local area to sing at the Young Voices concert at the Utilita Arena in Sheffield. During the concert, the choir sang their favourite songs, such as “Sing from your Heart”, as well as doing some dance moves to various songs from the Lion King with the help of Urban Strides.  The choir even joined in with a song performed by The Beatbox Collective. Afterwards, Jaxson said, “I really enjoyed that we were singing in sync with all of the other children in the concert.”  Amelia added, “The best part was when the song ended, the lights were turned off and all the children shone their torches.  It created an effect like stars twinkling in the sky.”