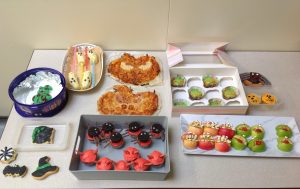 Last week, the school council had the difficult job of deciding who would represent West End in the final round of Waterton’s Young Chef competition. All the children were asked to make a Halloween-inspired dish to enter the trust’s competition. The school council tasted all the entries before announcing that Bradley and Harry would now compete in the final against other schools in the trust.

After the tasting session, Henley said, “It was a difficult choice because I liked so many of the bakes.  The children had tried really hard.” Isabelle added, “The entries were really creative and I am looking forward to seeing how the boys get on in the final.”