Stars Of The Stage 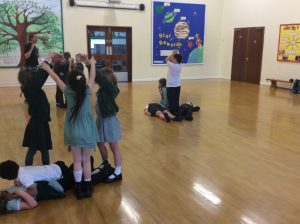 This half-term, the children in years 1 and 2 had the opportunity to learn new drama skills in an after-school club led by a specialist teacher from a local theatre company. The children played games to develop the use of their voice whilst they are on stage.  They also considered how they can use their body and gestures more effectively in order to improve their final performance. Angela said, “I like when we play the sea creatures game. When one moves, we have to clap.  In order to play this game, you have to pay close attention and work quickly.”   Ava added, “I like how we have made objects as a group.  The haunted house was my favourite and I was a vampire.”