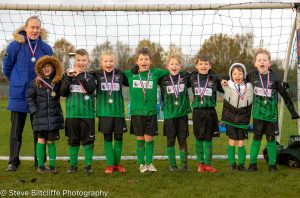 Recently, the school football team took part in a local tournament at Sharlston Community School and was crowned champions without losing a match.

The team, made up of children from year 3 and 4, competed against other schools who are also sponsored by Waterton Academy Trust.  They managed to win three out of their four games and conceded only two goals throughout the whole tournament. Harry said, “I don’t play football outside of school, as I normally play rugby instead, but it was great to take part.”  Harris added, “I liked playing multiple games against different schools.  I felt that we worked well as a team, especially in defence, to win the competition.”