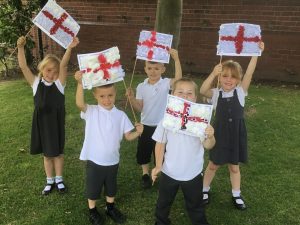 This week, the children in our Foundation Stage have been making England flags in preparation for the European Football Championship final on Sunday.

It is the first time that the men’s football team have reached a final of a major football tournament for fifty-five years.  Many of our children have been following the games and are really excited to see if England win the final.

After making a flag, Cadence said,  “To make my flag, I scrunched up different materials. I also worked out that I needed to wrap cotton wool in paper to keep it in the lines.”  Frankie added, “I think England will win and they will score eleven goals!”