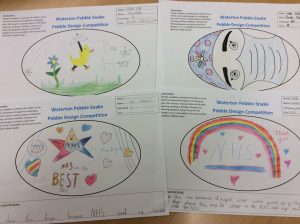 The competition asked the children to design a pebble which celebrated the efforts of the community during the last year.  The designs of Isla Osborne and Maddison Dwyer were chosen as the winners and they will now work with an artist to actually make their design.

Maddison said, “I chose to include a duck on my design as I wanted to make people laugh and throughout lockdown we have needed to keep positive.”  Corey added, “It was a really difficult decision for the school council to choose the winners as all the designs were great.”