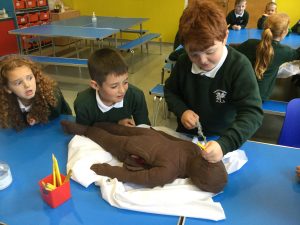 This week, our year 4 class visited Leeds City Museum to find out more about the Ancient Egyptian civilisation. The children had the opportunity to explore artefacts from Ancient Egyptian times as they walked around the museum.  They also saw the famous mummified remains of Nesyamun. After, the class took part in a workshop to help them remember the different stages of mummification. After the trip, Harry said, “We learnt that the Ancient Egyptians used salt and cinnamon to embalm the mummy.” Theo added, “During mummification, the heart was weighed and if it was light, they would go to the afterlife.  If the heart was heavy, it would be eaten by Ammit.”